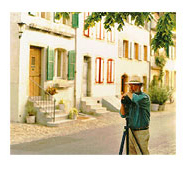 In 1966, when Dennis Barloga was given a camera o document an upcoming Peace Corps experience, his life’s direction was forever changed. He immediately found himself both challenged and frustrated by the difficulty of making his photographs express reality as he saw it. As he became increasingly excited by photography’s possibilities, he found himself working almost as many hours in the darkroom as he was teaching in the classroom.

Upon returning from his Peace Corps stint in Tonga, Dennis decided to abandon the security of teaching and began two years of commercial photography training a San Francisco City College. While in school and immediately afterwards he offered freelance commercial services in news, public relations and portraiture to local as well as national clients. However, even as his success began to grow, so also did his lack of fulfillment.

In 1973, Dennis’ work took a quieter, more expressive turn concerned mostly with nature’s moods, designs, colors and forms. His photographic interpretations were well received and as of now are collected on five continents and throughout the United States. Dennis’ work has also appeared in books, calendars and magazines on a national as well as local level. For nine years (1979-87) he owned the Dennis Barloga Gallery at Pier 39 in San Francisco.

However, in 1986, fate intervened on a twentieth anniversary trip to Paris. A new photographic interest was awakened by the architectural beauty of the City of Light. Doors, windows, house fronts, storefronts and cafe scenes all became new subject matter, but mood, design, color and form were still the primary interest. Since then, Dennis has returned to Europe twice a year with the sole intention of capturing on film those moments and places that define the uniqueness and beauty of Europe as he sees it. This body of work is currently shown both at various art festivals in the western United States as well as selected shops and galleries world wide.

“Nothing about European travel is more exciting to me than walking around a thousand year old rural village at dawn’s first light. The time-worn, but enduring stone architecture bathed in the soft first light of morning never fails to inspire me. The photographic compositions involving details, like the textures and colors of a century old door, are my favorites. The combination of the serene early light and a striking architectural detail create both a tranquil mood and a strong sense of the place. These are the moments and places that remain as strong memories long after I’ve returned home. I hope these images from my travel journal remind you of special moments and places of your own.”